A few weeks ago during Kainos kickoff event I ran a short unconference for our GOV Business Unit, the unit that focuses on Government projects like the Government Digital Services.

TL;DR - It was great fun and well worth the time: Photos, Session topics, notes from the sessions to come soon. 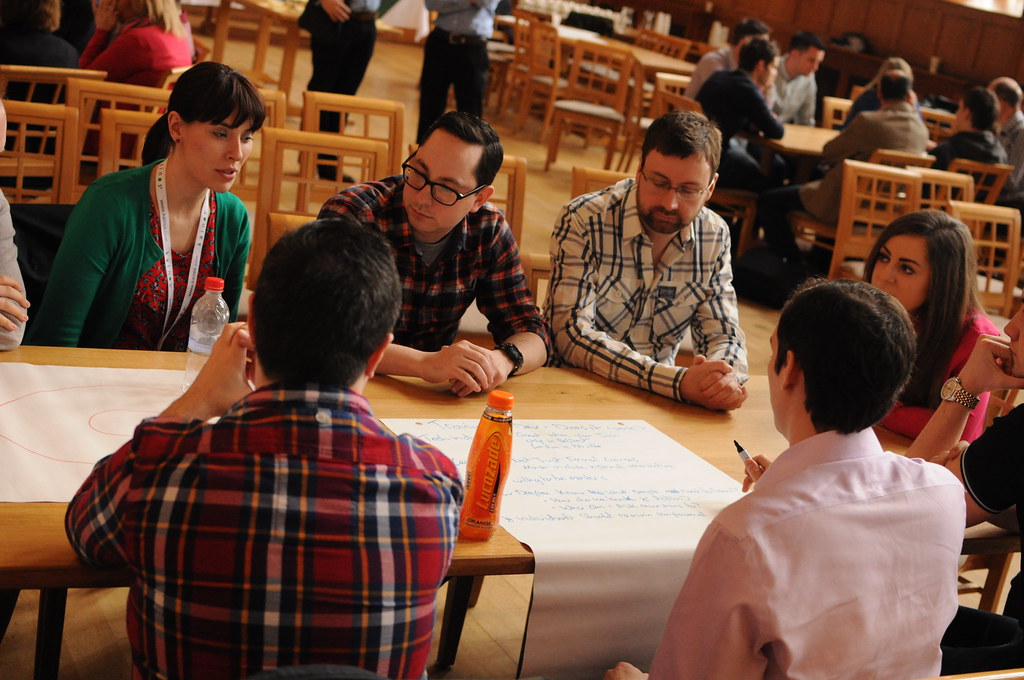 An un-conference is almost the opposite of a conference. A normal conference has a set agenda of speakers that talk to an audience on topics they chose weeks or months ago. 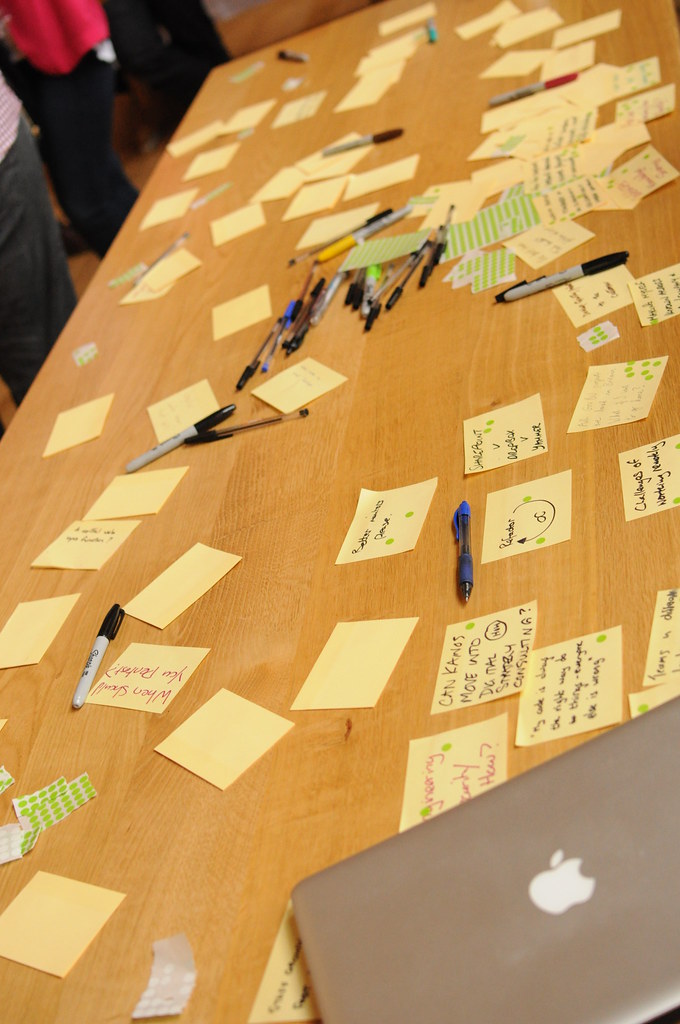 In an un-conference the agenda is chosen on the day by the attendees voting on topics they themselves have proposed. The topics are then assigned to areas or tables for a session and the attendees choose the one that sounds most interesting to sit at. Everyone at the table is encouraged to join in the group discussion and participate.

Usually at the end of each session someone from each group would give a two minute recap of what the discussion led to, so anyone not involved can get the gist and have a face to talk to if they’d like to continue the conversation. We unfortunately didn’t have the time but will be publishing the notes taken instead.

All of the session topics are available at http://michaelallen.io/gov-bu-unconf

Due to time constraints with the main kickoff event happening in the afternoon we were forced to hold the event for only an hour. This gave enough time for 3 sessions of 15 to 20 mins each, with 6 tables at which to form groups. In total we got conversation started on 18 topics and though it wasn’t long enough to really go in depth on those I hope it started conversation flowing.

Next time, I’d like to take at least two hours and spread the voting and suggesting portion through the day more.

Everyone likes to participate

I was initially worried that it would be difficult to motivate people into participating in an event that requires a lot of interaction to work, especially given that this was the first time most of them had encountered the unconference format.

The worry was completely unfounded, thankfully. After an initial “eh, how do we start this?” at each table, everyone really got into the conversations and a lot of ideas started flying across the tables.

A great way to get to know people 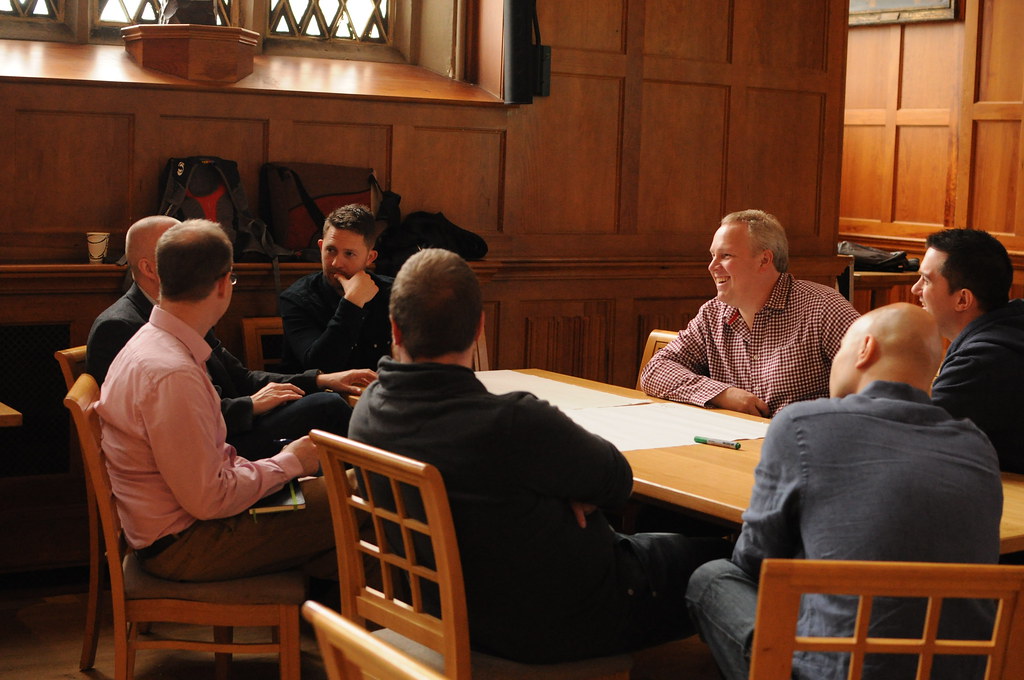 The fairly loose structure allowed you to get a real sense of the particpants; people I’ve barely seen in the last few years due to the nature of working on site. It’s this sense for the people that builds culture, which is hard to get when you spend most days working in another team’s office.

A great way to find out what you care about

The unconference was a great way to see what mattered to us, both as individuals and as a group. The topics that came up tended to follow a couple of themes, things we have all been thinking about and possibly haven’t said loud enough for everyone to hear. 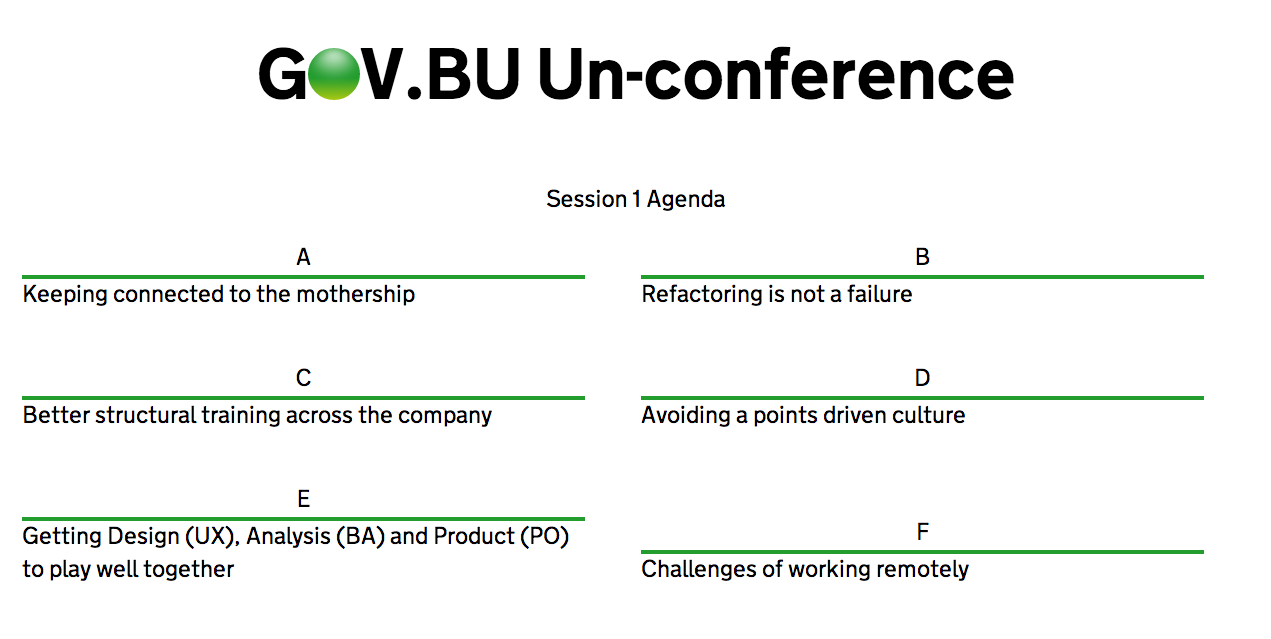 The topics we discussed can be found at http://michaelallen.io/gov-bu-unconf and write ups of the notes we took will come soon (I don’t actually have the pages).

Now we have an idea of what is important to us: culture, who Kainos is and how to spread knowledge. The hope is we can address these points. One item that came up was a disengagement with Yammer, so I’ve begun setting up a Kainos IRC as an experiement to address that.

Lets do it again

From the feedback I’ve heard most people had fun and I really enjoyed the unconference. I would be incredibly excited to participate in another, perhaps with less running around headless chicken style. So I’ll be trying to organise another soon and if anyone needs help setting one up give me a bell and I’ll gladly help.